Meet Patrick Prins - named a “musical astronaut” for his originality and diversity in sound. Responsible for bouncing dancefloors and stages around the world for the last 3 decades. A wholesome guy, yet described being one of the most influential Dutch Producers to date. Best known for releases on his Movin' Melodies label and his numerous side projects under countless aliases - Subliminal Cuts, The Ethics, Castle Trancelott, Artemesia, WARP9 to name a few. His recent POP projects like Fingertip, Be Sorry etc. have created quite a stir in the scene last year and created awareness all the way to the US Billboard chart. All equally recognizable even to those not familiar with his name.

His remix portfolio is extensive, Sia, Daft Punk, Felix, The Doors, Björk, Pet Shop Boys, Najwa Nimri etc. all treated with sonic precision. Who didn't go Balearic in Ibiza or to that effect in any other part of the world hearing his tunes. Still, there were many who for years didn't realise he was the guy behind all those infectious gems. Yet he liked it that way, you'd understand if you met the man.

Receiving several International awards including Best Dance Producer and hearing one of his classics “Le Voie Le Soleil” voted best Dance Record by the listeners of BBC and highlighted and performed by the Royal Liverpool Philharmonic left him saying simply... “incredible honour”.

We find his earlier work highly sought after and recognized as the most respected in its genre –his classic tracks revived by DJs around the world, and “Bits and Pieces” adopted by Scotland as a national soccer anthem and rocked out by Lewis Capaldi and Calvin Harris.

Nowadays living in Spain, continuously writing music and often producing other artist under countless pseudonyms feels “balanced” he says. His recent producing and writing for Spanish act Chambao and French stars Benjamin Biolay and OrelSan reveal his authenticity and diversity in music. Always looking for originality and dynamics in that sometimes loudness war. Patrick also made name as photographer and painter. His music can be found in films and games.

His rare live sets are jaw dropping. Loved by clubbers and artist alike, Producers and DJ's around the world name him one of their biggest influences. Not bad then for a young kid who started out playing around with the pause button of his parents tape deck, became a drummer and DJ on the local scene, went on to study Piano and Sound Engineering at the Conservatory in Amsterdam followed studying Social Psychology and then had so many jobs before finally getting the foothold that led to global success he'd go on to enjoy.

Remaining at the forefront, Patrick's projects and collaborations highly sought after and recognized as the most original and respected in their genres. 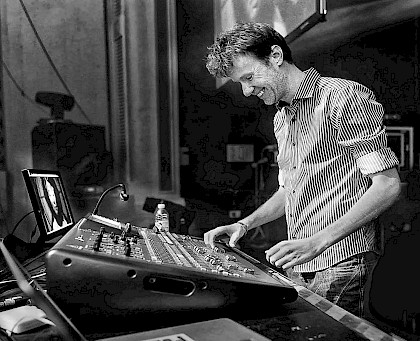